If you leave me I will leave you: a pill to say goodbye to love sickness

If it is true that emotions are also a biochemical fact, then some molecules could “cure us” of disappointments and help us find balance when passion hurts. At least this is the thesis of some psychiatrists

Heleft. And here we are, inconsolable , to consume mountains of handkerchiefs to wipe away the tears and to hope that somewhere in the world there is indeed Lacuna Inc., which in If you leave me the gatepromised to wipe out all the memories of a finished story from the mind bad. Science fiction from film but not too much, because for neuro-scientists love is a matter of molecules that accumulate in the brain, of brain areas that are activated or are switched off, of addictive symptoms similar to those of the drug user: from their point of view the question is very little poetic in short, but the other side of the coin of considering love a “simple” biological factit’s that you can try a cure when it makes you feel too sick. Or maybe to make him fall in love with us, novel witches struggling with love filters: no magic potion though, but real drugs to change what’s happening in the brain and forget about the faithless guy who dumped us faster. Or to see again as an adonis a partner who has bored us a little. Possible, really?

As an obsession,
Brian Earp, director of the Yale-Hastings Program in Ethics and Health Policy of Yale University, has been studying the issue for years and believes that in some special case it is appropriate to rely on pills, for example to get out of sick love affairs or from sufferings that risk sucking our lives. Because, surprise, love-sickness pills already exist, as Brian Earp points out: “Studies in the field are still in their infancy but we already see various possibilities, perhaps taking advantage of the side effects of some known drugs”. Let’s take the most used antidepressants, which increase the amount of serotonin in the brain: one of the unintended consequences is that they smooth extreme emotions, making it more difficult to establish a bond. Et voilà, here is a cure for when, after the end of a story, we are prey to a kind of obsessive-compulsive disorder so we think only of “him”: Donatella Marazziti, psychiatrist and scientific director of the Brain Research Foundation of Lucca , he discovered that this “tunnel” view of lovers (suffering) is associated with a decline in serotonin, so a drug that restores its levels could heal its pain. “Be careful though, love has biological mechanisms but it is very complex,” says Marazziti. “Our brain is equipped to withstand the storm of neurotransmitterswhich is associated with falling in love and also that which overwhelms us when a story ends, similar to what happens after a loss: it is possible to get out of it without pills. A help is needed only if the love becomes pathological, obsessive and for example the pain is such that it leads to suicidal thoughts, or if, more than a year after the end of a relationship, we are still tormenting ourselves ».

Betrayed by hormones
Antidepressants would not be the only pill for love sickness: even drugs to increase levels of oxytocin and / or dopamine could be useful because in the case of unrequited love a significant drop in these two substances is observed in the brain. The first is the love hormone: it increases when we exchange effusions with our partner but also during lactation and it is essential to cement attachment bonds; dopamine instead is the molecule of gratification, which grows when we enjoy it, for example for food or sex. Drugs cause the dopamine to jump upwards in the brain circuits of the reward, love does the same: this is why it is addictive, that’s why when it ends it feels like toxic to which the “dose” has been denied, in full abstinence from what makes us feel good (unfortunately, he who has gone with the other). Taking pills to restore good levels of oxytocin or dopamine could therefore help, but there are also those who point to solutions similar to the treatment that made a clean sweep of Kate Winslet’s love memories in the film we mentioned: Helen Fisher of Rutgers University he discovered that the pale ventral globe of the brain, a part of our brain involved in attachment, is more active in those who suffer from the end of a love than those who live a serene relationship. The hyper-activation decreases and returns to normal with the months, as the suffering for the end of the relationship is reduced . This is a tangible proof that time soothes the torments of love, but it also signals the possibility of using brain stimulation to “extinguish” the pale globe first and accelerate the return to a serene life according to Fisher, who believes that similar therapies are also possible to those proposed for post-traumatic stress disorder in which one tries to replace a painful memory with a more bearable thought.

20 sex taboos that are no longer taboo

Are you afraid of exaggerating and all in all these seem too invasive therapies ? There is also the supplement: launched a few years ago, it contains plant extracts, the “griffonia simplicifolia”, rich in precursors of serotonin. There are no studies that prove its effectiveness against love sickness, but after months of crying alone in front of the umpteenth replica of some romantic movie it is understandable that you want to try. 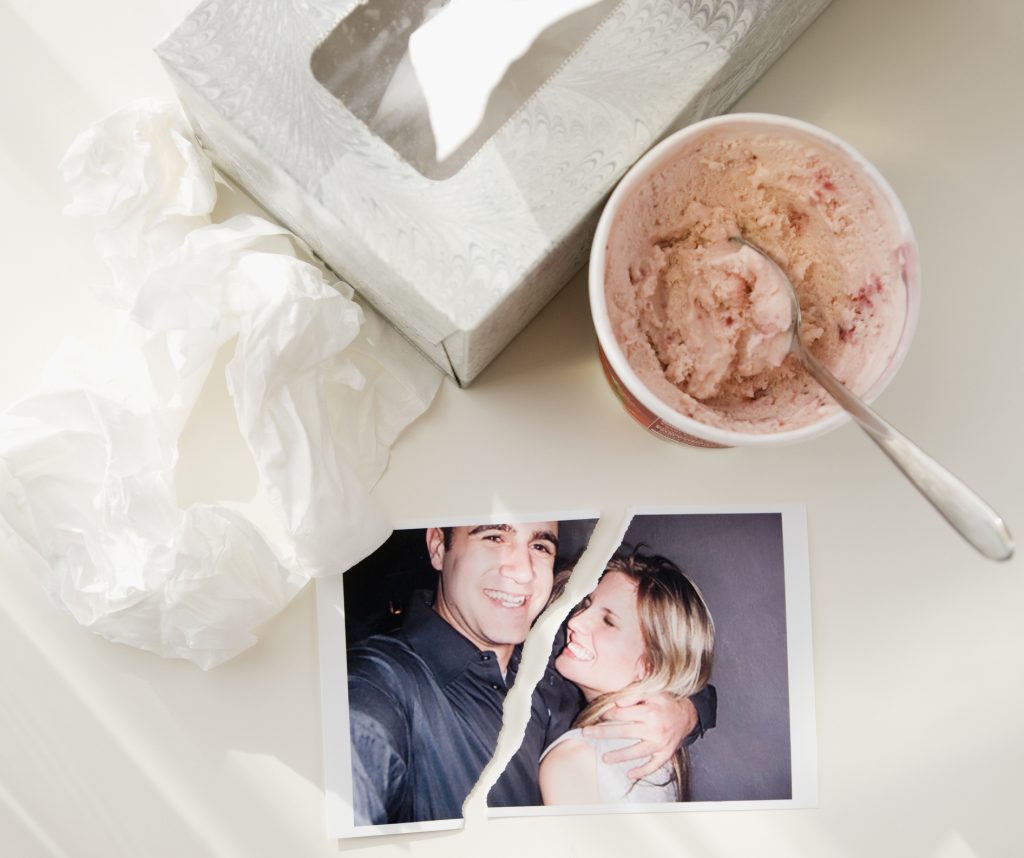 No, it’s not a disease
But the experts agree: there is no need to launch on biochemistry as soon as he leaves. As explained by Liliana Dell’Osso, director of the Psychiatric Clinic of the University of Pisa: «Not all unrequited or abandoned lovers develop a mental disorder, for example an addiction to the former or separation anxiety: we need a set of vulnerabilities individual, environmental stimuli, circumstances. Love is not a disease in itselfbut it can lead to the discovery of a fragility, take psychopathological modalities. In a study of a thousand stalkers, half were affected by mental disorders. In these cases, and only in these cases, a therapeutic intervention, even a pharmacological one, may be appropriate: the unrequited love or the finished love is not treated, but the pathology that the end of a relationship may have made emerge “. It is therefore necessary to get out of it, also because, as Earp points out, “The risks of abuse of these drugs exist and use is always possible, from the use to dampen the homosexual desire to use to avoid” uncomfortable “loves”. The studies on anti-love biotechnologies are at the beginning, but we must now ask ourselves whether it is ethical to use them “.

Miracles (and risks) of oxytocin
Can a marriage get a little tired with pills? Perhaps: a group of Israeli scholars have discovered that functioning couples have higher levels of this substance, called the love hormone. So there are those who are studying if spraying oxytocin in the nose(it is in the form of a spray) can prevent sudden divorces.
For now there is no certainty that the approach works, to the point that the neuroeticist Brian Earp, one of the supporters of marriage aid, thinks that we should opt for drugs that increase dopamine, like some appropriately dosed drugs. The risks are high. Much more prudent to increase the oxytocin circulating in the partners through natural ways. Such as? With pampering and attention, which increase its production: the more it shows affection, the stronger the bond is strengthened. Without side effects.

The role of women in the life of a man Woman. Feminine beginning. Dark and incomprehensible Yin, which everywhere complements the bright male half of...

Jealousy. How to get rid of jealousy?

Jealousy. How to get rid of jealousy? We are all owners by nature. We want to own things and people. Possessing (or having) is normal quality...

Psychology of love relationships – how to learn to love?

Money and love: how important is money?

The first date? Five (scientific) rules to make it perfect

Between so many smiles, you chose mine.

How to be interesting for a man?